The Beta 5 is a very common lantern in many parts of the UK - this includes Derbyshire, where the lantern is probably one of the commonest fittings seen on residential streets. It has been used here for many years and so three nearby streets may have several versions of the Beta 5 along them - as is the case below.

The first example is a gear-in-base Beta 5 mounted to a tubular steel column in Chaddesden. The lantern is controlled by a Zodion SS55 two-part cell.

The example has a stainless steel bowl toggle - this means that it was made no later than 1981 - the year when Thorn went over to using plastic toggles.

This example is on Darley Park Drive in Darley Abbey - the finial on this swan neck has been removed to allow for the side-entry lantern. Following repairs, the original deep bowl of this lantern has been replaced with a modern shallow bowl - unfortunately the modern bowls do not fit the old-style lanterns due to the depth of the gear tray, and so the front end has had to be taped in place. Dirt has all ready been able to enter, and as a result, the amount of downward light will be somewhat limited!

Despite Darley Park Drive having been relit as part of the Derby Street Lighting PFI, this column was retained, although the lantern was later removed - click here for details.

Thanks to Antony Stevenson for spotting this Beta 5 - this installation can be found on Highfield Road near Derby City Centre. This is another surviving cast iron column, however the original bracket has been replaced at some point in the past. 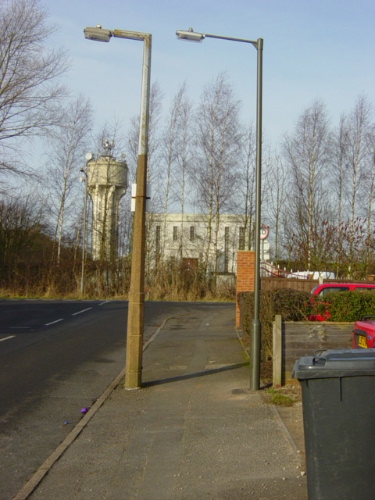 The majority of concrete columns in Derby were sleeved in the mid 1990s - though a small number were sleeved in the mid 1980s as well - including this now-removed example (notice the plastic bowl toggle on the lantern) alongside its modern replacement. The biggest difference between the old and new sleeves (examples below) is that these do not taper as they approach the lantern. This photograph is also good for comparing two different versions of the Beta 5 - notice how bulky the 1980s' version looks in comparison to the new one.

These two pictures show how the new style of sleeve compares to the older design. This was also previously another very common style of installation in Derby - especially with the Hylite HL4N cell fitted to the lantern!

Another variant - the shallow-bowled option:

A shorter sleeve is employed here - note that the Beta 5 doesn't appear to have a photocell. A NEMA socket was fitted originally but this has been blanked off with a conduit box lid - the lantern is switched via a Sangamo time switch in the base.

This example also features a shorter sleeve. Unusually, the NEMA socket is positioned to the front of the lantern. This is another gear-in-base example.

A full base compartment is the order of the day for this example on a 5 m tubular steel column.

Some Beta 5s are located in areas where vandalism is sadly a regular occurrence - in some places this problem has been solved by attaching a wire grille to the lantern to make it more difficult to smash the lamp and bowl. The downside to these grilles (apart from the fact that they look incredibly ugly) is that leaves and other debris gets trapped in the grille; restricting light output quite significantly.

A very unusual installation here - a Beta 5 installed at 6 m! I quite like this installation as the short lantern is reminiscent of the mercury lantern which would have been fitted in years gone by. In the background, two Philips Trafficvisions can be seen on the A38.

Old meets new here! This unusual setup can be seen in Findern and is due to road realignment in the mid 1990s as a result of the A50 Southern Derby bypass being constructed. What was previously part of Heath Lane is now a public footpath, lit with side-entry Beta 5s on Abacus drop-down columns. The original 'road' lanterns, top-entry Beta 5s mounted to wooden Electricity Board poles, still survive, although they have long since been disconnected. Close-up photographs of the two disused lanterns can be seen here.

Although designed for mounting heights of around 5 m, there is one Beta 5 in Derbyshire that is fitted to a 12 m column, believe it or not - the picture below should explain the reason...

This lantern in Chesterfield is attached to a 12 m base-hinged columns (made by Abacus); it provides illumination for an adjacent pedestrian footbridge - the bridge having no provision for lighting itself.