The MI 26 was, as far as I am aware, launched in the early 1990s as a replacement for the aluminium-canopied MI 50. It appeared here at about the same time; usually as a replacement lantern for something else. Its popularity was short-lived however, as Thorn's Beta 5 soon regained the top seat as the county's choice of side-road lantern. Examples were still fitted in some new housing estates in the mid-1990s but then there was another gap of a few years before it was used again - it was about the year 2000 when new examples appeared again; but this time it had a new name and was fitted with an electronic one-piece ballast as standard. It was then only used on new columns and not retro-fitted to existing ones. These were almost always fitted with Royce Thompson Oasis 2000 cells.

This isn't a deleted scene from "Attack of the Killer Philips lanterns"; there really is an MI 26/XGS 103 in close proximity to an MI 36/XGS 104! Both columns are at 5 m although the angle at which the photographs were taken suggests that the front column is higher. The columns are located on St Mary's Wharf Road. Presumably the 'road' lighting scheme was designed separately to the 'car parking' scheme and there was never any comparison of the two designs before the columns were installed.

This MI 26 has been retrofitted to a cast iron column's swan neck. The light green colour of the metalwork will be quite old - it was the colour which was used prior to the modern 'Derbyshire Green' seen in the photographs of the steel columns below. By the early 1990s, installations in this colour were becoming increasingly difficult to find - cast irons seemed to be the last types to be painted. I can vaguely remember examples - however, these have now all been repainted or completely replaced.

This MI 26 is fitted on a short-outreach swan neck which is mounted to a Stewart and Lloyd steel column. This may have been a mercury installation at one time. Sadly, this column was replaced in 2005 when the road was relit with WRTL Arcs.

This MI 26 is fitted to a sleeved Stanton 7. In November 1973, an ESLA with rimpled mirrors and an anti-glare shield was fitted to the original Stanton curved bracket. How do I know this? Well, the column is featured on the Picture The Past website - the 'then' pictures can be seen by holding your mouse cursor over the photographs: 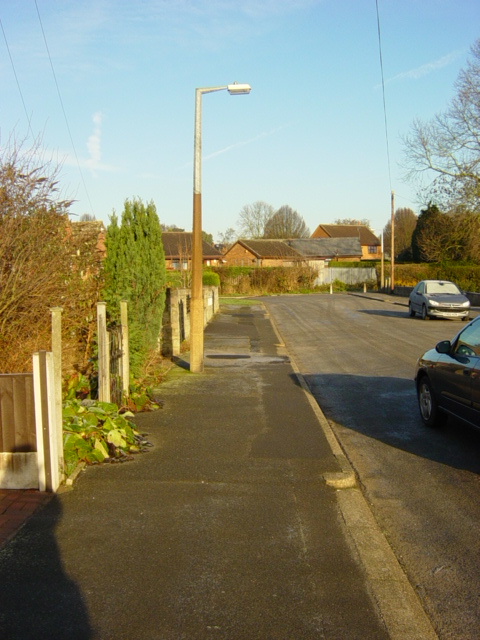 The 1973 photographs are credited to Derby City Council.

This MI 26 in Buxton is fitted to a (leaning) Stanton 10 concrete column; a very short outreach bracket links the column and the lantern.

Originally, a small lantern running a mercury vapour lamp; for example, a GEC Z8896 would have been fitted. Judging by how the dirt has accumulated on this lantern, the column appears to have been off-vertical for years.

This XGS 103 is fitted with a tall-cone Oasis 2000, meaning that it was one of the first of the electronic ballast versions to be fitted.

This is an identical setup as above - except that the lantern is dayburning! Oddly, the cell had reset the next day - perhaps it was the hot weather that temporarily caused it to stop working. The tarmac strip leading from the column was for a cable run leading to a sign - the post was removed about a week or so after it had been installed and the plate fixed to the lighting column instead!

Although the dayburning issue never (to my knowledge) re-occurred, the cell was replaced in 2014; a SELC / Westire AcRo photocell now switches the lantern.

This XGS 103 on the Heatherton estate in Littleover was also dayburning, when pictured in April 2017; the rather discoloured Royce Thompson Monostar 1000 photocell providing a clue as to why this was...click here to view a close-up of the photocell - it looks perfectly healthy to me!

The bowl from this XGS disappeared rather suddenly but the lantern continued to run without it (even though the outer-bulb of the lamp went very black!) - I would have thought that the electronic ballast may have been damaged by the reduced IP rating, but not apparently so.

Wednesday, 1st December 2010 saw most of Derbyshire covered in a thick blanket of snow. The heat emitted from this MI 26 operating overnight prevented a significant build-up of snow on the lantern's canopy (although the temperature had reduced sufficiently after the lanterns had deactivated at dawn for icicles to form). This lantern (and bracket) was removed from service in April 2019, following conversion to a Thorn Isaro 12 LED lantern mounted to the column. Fortunately, the outgoing equipment was saved and now resides in my Collection.

The post-top version of the XGS 103 is not widely used here - it only appears on particularly narrow footpaths. Notice that this version uses a newer Oasis - this is because it was installed in 2002. This lantern was removed in April 2018 and entered my collection; for photographs, please click here.

This example is fitted to a different style of raise-and-lower column and an anti-glare shield is fitted - that must make opening the bowl quite difficult!

Although designed for mounting heights of around 5 m, there are two MI 26s in Derbyshire (and one Beta 5) that are fitted to 12 m columns, believe it or not - the picture below should explain the reason...

These lanterns in Chesterfield are attached to 12 m base-hinged columns (made by Abacus); they provide illumination for an adjacent pedestrian footbridge - the bridge having no provision for lighting itself.

The columns are topped with standard 34 mm / 76 mm outreach brackets, although adaptors are fitted to the column spigots, in order to reduce the 140 mm diameter of the column to 76 mm. The example below is the close-up of the lantern in the background in the main picture.