The Arc first appeared in Derbyshire in 2004 - it wasn't until about a year later that the lantern was first used in Derby City, however. The lantern can be mounted both side entry and post top - both types are shown on this page. SON lamps are the order of the day in Derby City; whilst compact fluorescent and metal halide examples can also be seen in the wider county of Derbyshire. The smaller Arc 80 can accommodate lamps up to 150 W; whereas the larger Arc 90 can be fitted with lamps up to 600 W - though 250 W is the maximum used in Derbyshire.

This small cul-de-sac in Heanor is home to several 35 W CDM-T examples; this is the only road in Derbyshire where this type of lamp is employed.

The miniscule capsule lamp can only just be seen in the Arc's elliptical optic. A Royce Thompson Oasis 2000 photocell rated at 55 Lux is employed.

These Arcs with 42 W PL-T lamps are mounted on 5 m columns at a development in Buxton.

More 5 m 42 W Arcs here - seen on a rainy January night. Notice that the second lantern along has a lamp with a lower colour temperature than the other two.

These 42 W Arcs are on (what was when the photograph was taken) a new development in Belper. Although 42 W lamps will 'work' at 6 m, the output can appear quite dim to the human eye. 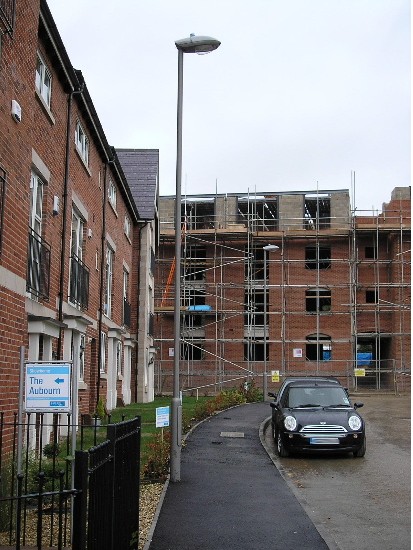 Also in Belper are these Arcs running 57 W PL-T lamps at 6 m. Unusually, the installer has opted for lanterns sporting curved glass bowls, rather than the 'standard' deep polycarbonate bowl. The columns lead onto what was the site of the Parks Secondary Modern school - this access road was the original driveway into the school.

The same installation as seen at night.

This Arc has been retro-fitted to a column which once supported a Thorn Beta 5. Notice that this looks a little too big for the bracket!

This Arc is around the corner from the previous example. At the time of photographing, it had been vandalised.

This post-top Arc replaced a GEC Z9538 when the column it was on was damaged in a collision. The SS3DR cell was faulty from when the lantern was first powered up and was duly changed. 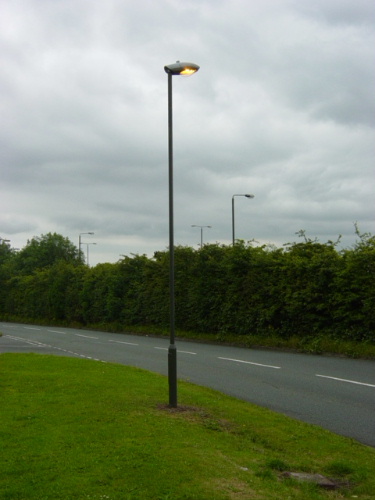 This post top Arc is fitted to a drop-down column and will soon replace this pole-mounted GEC Z9532. Oddly, an elliptical lamp has been fitted in the Arc - presumably to reduce glare in the narrow footpath. A Beta 5 was originally fitted to the new column - this photograph was taken soon after the changeover.

This Arc was used to replace a vandalised Z5698U. Click here for more details.

The Arc provides a good cover of light when in use.

Another couple of photographs of Arcs in Buxton - this 6 m 70 W example is adjacent the development mentioned further up this page. The new column has been installed to replace the 5 m column and Beta 5 - when I visited, the service had all ready been transferred to the new column (hence, the temporary safety barriers surrounding the area).

This Arc in Matlock is mounted to a 6 m column with a diameter wider than the standard 76 mm as it also carries a School Safety Zone sign and a twin amber flashing unit - the wider diameter is necessary due to the added weight and windage being placed on the column by this equipment.

At the junction to the new development where the 6 m 57 W PL-T Arcs (as seen above) are used,  two new 8 m columns running 100 W SON-T Arcs have been installed. Previously, there were two 6 m concrete columns with 55 W SOX lanterns here, but the higher columns were required due to the width of the road at this point.

This 100 W Arc was located in Markeaton Park. It was removed a few weeks after these pictures were taken and replaced with a Thorn Alpha 8 running a 250 W MBF lamp.

This 100 W example in Duffield would have replaced a Thorn Alpha 9 90 W SOX lantern.

This must have been a slightly earlier replacement, as this lantern carried WRTL branding.

This 100 W example is located just off the A6 at Whatstandwell. It replaced a cast iron column fitted with a Thorn Beta 5 35 W SOX lantern in late 2012. The lantern incorporates control gear that automatically dims the lamp's output by 30 per cent at approximately midnight until approximately 6 am. A Zodion Super6 photocell is fitted.

This wall-mounted 150 W SON example, complete with polycarbonate bowl, is in Bolsover.

This 150 W SON-T Arc is located on Nottingham Road, Ilkeston, and is attached to the spigot of a 10 m column. This column replaced a 10 m Stanton 1810 concrete column supporting a Philips MA 50 135 W SOX lantern, as part of the construction of a new housing development opposite.

The lantern is the larger "Arc 90" type, and features a curved glass bowl.

The narrow profile of the curved glass bowl is apparent here.

An internal mechanism within the lantern provides an upward tilt of five degrees; this can be altered by manually adjusting the mechanism.

The size difference between the Arc 80 and Arc 90 is apparent when the photocell almost looks miniature when viewed from ground level!

The Philips-made lamp can be seen within the lantern optic.

This Arc 80 in Chesterfield has had its factory-fitted optic and bowl removed and replaced with a retro-fit LED solution.

The retro-fit solution features 14 LEDs housed within an oblong-shaped enclosure. Notice also the cranked bracket adaptor - Chesterfield is home to many of these hockey stick columns with the bracket section angled steeply, but when LED lanterns are fitted to them, there is a tendency for the lantern's beam to be focused too far across the road. In extreme cases, this can also cause glare issues for any residents living opposite the column; the adaptors being fitted in order to reduce the lantern tilt.